Because you never know when that cheap garage-sale couch could go super-critical.

Local fire inspectors began making their rounds this week in 46 Bergen County towns with a small device on their belts that lets them know when there is a radiation source nearby.

The devices — called personal radiation detectors — are part of a federally funded anti-terrorism initiative aimed at foiling any attempt to create havoc by concealing or transporting a so-called dirty bomb or other radioactive materials.

A grant from Homeland Security paid for the training and the devices, which cost about $500 each and are about the size of a large cellphone. They are also being distributed to fire inspectors within the New Jersey Urban Area Security Initiative, which includes Jersey City and Newark plus Passaic, Hudson, Essex, Middlesex, Morris and Union counties.

And beware of banana bombs.

Rauch said it’s not uncommon for the devices to routinely detect normal background sources of radiation.

For example, a person who has just undergone a dose of radiation treatment can trigger the device. So can a large shipment of potassium-rich bananas or certain kinds of ceramics or a large amount of the clay in kitty litter. X-ray machines in hospitals and dental offices will also show up on the device.

Here’s a terrorist pro-tip — hide your plutonium in the kitty litter!

So-called “green jobs” count 17 times. Even if the company goes tits up and takes the taxpayers “green” with it.

But actual Real Jobs in the here and now? They don’t count if they’re associated with Keystone XL.

President Obama doubled down Tuesday on his claim that the Keystone XL oil pipeline would create just a handful of jobs, despite being hammered by Republicans and fact-checkers alike for the claim.

“They keep on talking about this — an oil pipeline coming down from Canada that’s estimated to create about 50 permanent jobs. That’s not a jobs plan,” Obama said.

In citing the 50-jobs number, though, the president was using the smallest possible number attached to the pipeline project. The estimate he used likely refers to a State Department finding that — after the pipeline is built — it would take roughly 50 people to maintain it.

But the comment ignores the rest of the State Department report that estimates the project would create nearly 4,000 annual construction jobs — and potentially “support” an annual 42,000 jobs.

A Washington Post fact-check column on Tuesday questioned why the administration would ignore its own numbers.

Because ignoring them advances the anti-energy, anti-people, anti-American agenda espoused by the radical econuts, that’s why.

And if real people have to freeze in the dark? That’s just the price America has to pay to save Mother Gaia.

Two of the stars of the Bravo television show “The Real Housewives of New Jersey”  – Teresa Giudice, 41, and her husband, Giuseppe “Joe” Giudice, 43, were charged in a conspiracy to defraud lenders and illegally obtain mortgages and other loans as well as allegedly hiding assets and income during a bankruptcy case, U.S. Attorney Paul J. Fishman announced. The Giudices, who are residents of Towaco, NJ., were indicted Monday by a federal grand jury.

Alas, the grand jury neglected to include “good taste fraud, ” meaning future episodes of RHoNJ starring these two connivers will keep right on assaulting our sensibilities.

Poof, half your money just disappeared into a Euroweenie bailout fund.

The Cypriot government says depositors at the country’s largest bank will lose 47.5 percent of their savings over the 100,000-euro ($132,000) insurance limit.

Large depositors in Cyprus’ two biggest lenders were forced to take losses as a condition of a 23 billion-euro ($30.5 billion) rescue package the country agreed on with its eurozone partners and the International Monetary Fund in March.

When Obama says he wants America to be more like Europe, you have to wonder if this isn’t the kind of thing he has in mind.

Our debt-to-GDP ratio is now 3 to 1. Sooner or later all that debt is gonna come due. And as the saying goes, banks are where the money’s at.

Influential? Me? Karen at The Lonely Conservative thinks so! And she’s like 10 million times cooler than me, so yeah, maybe I am! 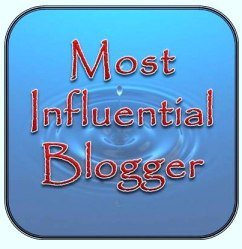 There is no actual voting, it’s just a fun way to bring recognition to other blogs and bloggers that are out there.

Which means that I am already a winner! Yeah, baby!

Here are the rules:

1. Display the award logo on your blog.

2. Link back to the person who nominated you

3. Answer 7 questions decided up by your nominator

4. Nominate ( no limit of nominations ) other bloggers for this award and link back to them.

1. Why did you start a political blog and when?

I started WyBlog in May of 2007, on a bet. A group of college friends started a writing club with the goal of churning out 3,000 words of original content month after month. They stopped after 3 years and patted themselves on the back for a Job Well Done. Me, I don’t know when to quit. And really, what would the blogosphere be like if you guys didn’t have Wysocki to kick around anymore?

2. If President Obama invited you to a beer summit, would you attend?

Sure. But I’d bring my own beer.

3. Do you think there is any hope of restoring the United States to a constitutional republic in your lifetime?

No. I think America is doomed to collapse under the weight of our ever-expanding welfare state. Detroit is our future, and it’s not gonna be pretty.

But what emerges from the ashes could very well be a reincarnation of the Founding Fathers’ vision for freedom and liberty. My goal is to prepare my daughter for a leadership role in America V2.0.

If you’ve read Asimov’s Foundation trilogy you’ll understand what I believe is coming down the pike. Maybe not 1,000 years of interregnum, but some period of unrest, followed by a rebirth. Our young people need to start planning now for that. Because you can be damn sure the progressives are planning for another socialist utopia, because they’re certain it’ll work eventually.

4. If you could visit one nation you have never visited before, what nation would that be?

America, as envisioned by the Founding Fathers!

Oh, you meant a contemporary nation. Well, Poland then.

5. Do you have a job that isn’t connected to blogging? If so, what is your occupation?

6. What book has influenced your life (other than the Bible or Torah) and describe how?

The first book to really leave a lasting impression on was Heinlein’s “The Number Of The Beast”. I think I read it when I was 12 or 13 and the entire premise of time travel, parallel universes, and invented reality blew my mind. I became a voracious reader of science fiction, Heinlein, Asimov, Clarke – “Childhood’s End” took me even farther into the philosophical nature of man’s relationship with God.

Then sometime in high school I read a short story (sorry, can’t remember the name) describing how a Polish teenager escaped first the Nazis and then the Soviet Union, by secreting himself underneath a railroad car and hanging on for dear life. And I thought, what would compel a kid to do that, which of course led me to discover all I could about WW II and the Communists.

7. How do you like to spend your time when you aren’t blogging or working?

You mean people do stuff besides blog and work? Because that’s all my wife thinks I do.

I’d like to think I’m a pretty good cook and I entertain this fantasy that one day I’ll face off against Bobby Flay on a barbecue throwdown. My favorite time of year is the fall because that’s when people like to gather for good hearty eating and some of my favorite dishes to create are stews and braised meats.

I also enjoy biking with my daughter and spending summers at the Jersey shore.

OK, time to nominate some worthy folks! I won’t repeat anyone already nominated by Karen (or Maggie, who passed the baton to Karen), because they already selected some pretty amazing bloggers.

Mind Numbed Robot — and the Robo-Response.

Matt at Conservative Hideout V2.0 — and he puts the ball back in my court.

Fishersville Mike — he says “thanks!”

Just A Conservative Girl — with her response.

And here are their seven questions:

1. Why did you start a political blog, and when?

2. If you could have dinner with any person, living or dead, who would it be?

3. Do you think there is any hope of restoring the United States to a constitutional republic in your lifetime?

4. If you could choose one state for Conservatives to “take over” and reshape into a vision of America congruent with Constitutional / Conservative principles, what state would you choose and why?

5. If you could retire anywhere, on or off the planet Earth, where would it be?

6. What book has influenced your life (other than the Bible or Torah) and describe how?

Democrats, are they crazy, or perverts?

NJ Democrats like to brag that Rep. Rush Holt is a bona fide Rocket Scientist.

U.S. Senate candidate Rush Holt said his claim made Monday that “millions will die” if something isn’t done to address global warming was reality, not hyperbole.

“I think it’s no exaggeration at all to say that millions will die. And in fact there’s pretty good evidence that millions already have died because of climate change,” Holt, a congressman from central New Jersey who’s seeking the Democratic nomination for U.S. Senate, said in a Star-Ledger editorial board meeting this morning.

The World Is Ending! The Sky Is Falling! Elect Rush Holt to the U.S. Senate or WE”RE ALL GONNA DIE!

He's pretty fly for a Jersey guy
Create a free website or blog at WordPress.com.